During the first year of the processed fruit and vegetables program in the Baltic countries, 2.644 actions have been fulfilled. They were pointed towards:

97.49 per cent from the estimated 537,005 euro budget were used towards the implementation of actions, where the activities and the budget on each Baltic country is distributed accordingly.

After the first year of implementation of this Program there is a very noticeable positive change: number of people who believe that the original country of the processed fruit and vegetables is irrelevant, started to fall drastically. In all markets, there is a 1 per cent drop compared to 2013 data: to 23 per cent in Lithuanian and Latvian markets, whereas to 19 per cent in the Estonian market. Fewer customers are no longer indifferent to what is produced in their preffered canned goods, since it affects their quality. EU applied strict conservation requirements and controls to ensure that the products are safe and nutritious.

Defining all the data, it is possible to see the influence of produced information: increasing number of consumers who do not doubt about the quality of processed fruit and vegetables. Moreover, they start to trust in the standarts that EU set towards the fruit and vegetables preservation. Also, there is a decrease among the people living in Baltic countries who are prejudiced against canned products. Another important trend, there is a decline of people who do not have their opinion about processed fruit and vegetables at all. There is no doubt about the positive effects of the program, however, the indicators, that were set for the first year, were not met due to the fact that the activities were in progress only three quarters, but not the full year. This situation is the result of protracted common communication concept formation, the creation of layouts and their coordination, as well as, receiving the permits for the broadcasting rights. All in all, it is likely that the expected result could be possibly easily met if the program activities were carried out through the whole year since the program was established. 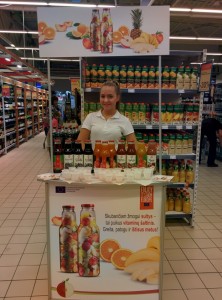